Over the past few weeks, municipalities across Alberta have been engaged in budget discussions. For the City of Edmonton, it’s a four-year budget. And it’s a critically important one for ATU and for Edmonton Transit. There have been some very good outcomes for us.

The BIG news, of course, is that City Council voted to NOT FUND THE REGIONAL TRANSIT COMMISSION’S ASK for $13 million dollars. This is a brilliant success for ATU Local 569. It means, for practical purposes, this version of Regional Transit is dead, our jobs are safe and we can get to the table to start working ona regional system that works for everybody.

As it turned out, there were no savings; only ongoing asks for more and more money to pay for CEO salaries, Commission members’ salaries, legal fees and an ongoing litany of expenses.

MAYOR SOHI was eloquent in his media statements and Council debate on Regional and it’s certain that his leadership on the issue convinced some other Councilors to vote with him. Thank you, Mr. Mayor!

On the capitol side of the budget, there’s money for:

On the Operations side, besides the Regional vote, there’s:

This has been a great budget season for ATU and for ETS. Almost everything we asked for is in and what’s missing, funding for the Temporary Cleaners to be permanent – that will come. Stay tuned. We’ve only just begun. 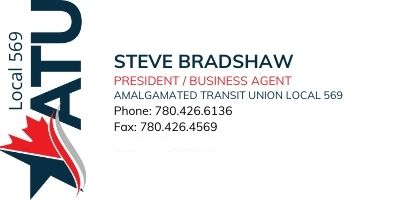